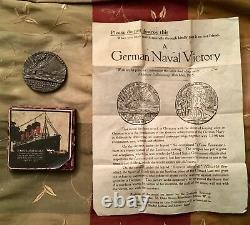 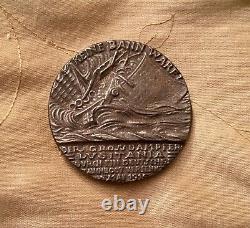 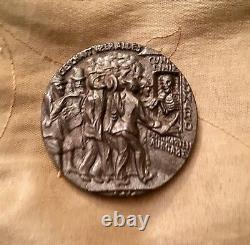 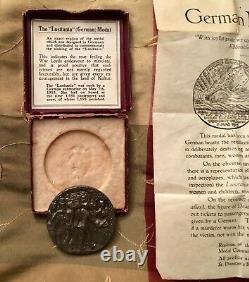 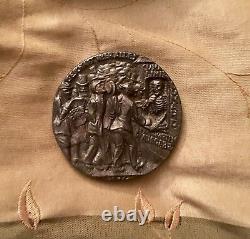 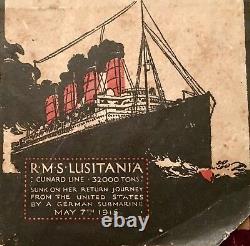 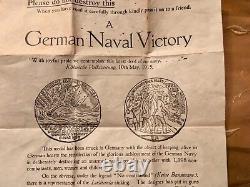 Original British Version of Karl Goetz Medallion, with original box and leaflet. RMS Lusitania was launched by the Cunard Line in 1906, at a time of fierce competition for the North Atlantic trade. In 1915, during the first World War, she was torpedoed by a German U-Boat off the coast of Ireland.

The sinking turned public opinion in many countries against Germany and contributed to the American entry into the War. In August 1915, the German medallist and sculptor Karl Goetz privately struck a run of medals as a satirical attack on the Cunard Line for trying to continue business as usual during wartime. Goetz blamed both the British government and the Cunard Line for allowing the Lusitania to sail despite the German embassy warnings that it was unsafe to do so.

One side of the medal shows the gun-laden Lusitania sinking, with the motto KEINE BANNWARE! Goetz had put an incorrect date for the sinking on the medal: instead of 7 May he had put 5 May - two days before the actual sinking. He later apparently struck a new run of medals with the correct (7 May) date. The Goetz medal attracted so much attention that the British Lord Newton, who was in charge of Propaganda at the Foreign Office in 1916, decided to develop the anti-German feelings aroused by it for propaganda purposes, and arranged for the medal to be reproduced. Proceeds from the sale of the medals benefitted blinded soldiers and sailors.

This item is in the category "Collectibles\Transportation\Boats & Ships\Cruise Ships & Ocean Liners\Cunard". The seller is "onthebriny" and is located in this country: US. This item can be shipped to North, South, or Latin America, all countries in Europe, Australia.