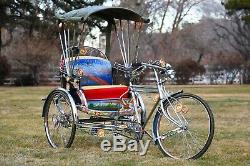 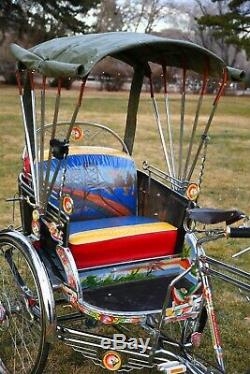 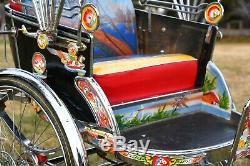 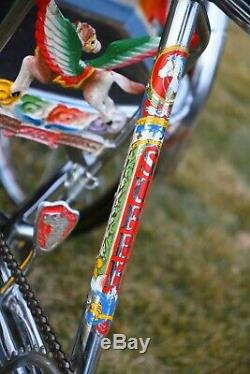 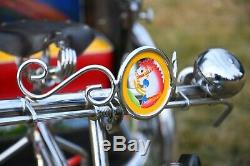 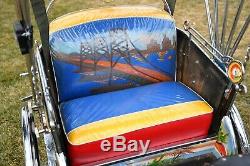 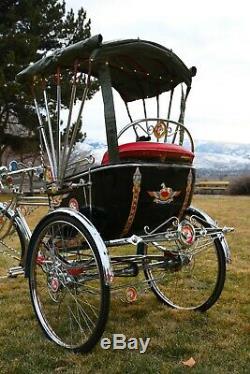 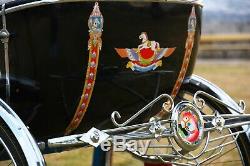 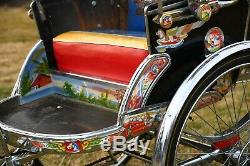 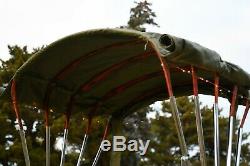 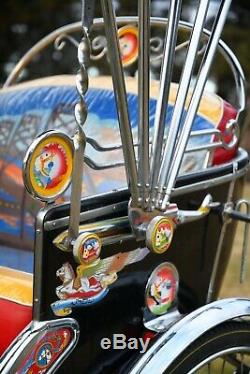 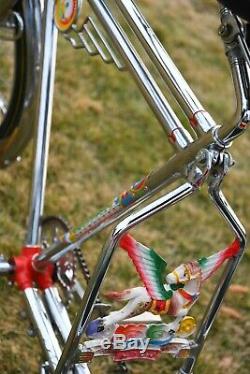 Most pedicabs are pretty plain, built more for function that style. Most versions found in America fit into this category. The Thai versions, on the other hand, can be pretty ornate.

That being said, most if not all would fall well short of this beauty, the most deluxe and hard-to-find of them all. This White Horse Super is wholly over the top with a full chrome frame and flamboyant ornamentation literally everywhere. We've counted 34 White Horse figures thus far and have likely missed more.

Beyond the horses there is also a landscape mural, a city mural and tons of floral and other decorations, all handpainted. Literally, every space has some form of decoration on it. Even the upholstered seatback cover is painted. We could have easily posted 60-70 photos to fully represent the pedicab, but alas, we are only allowed 12. If you'd like more photos, a FaceTime walk-around or whatever just let us know.

On the functional side, the pedicab has a vinyl canopy with wood braces. There are side and rear panels that roll down for traveling in rainy weather. On sunny days the canopy can be folded back to the "convertible" position and is held down with two brackets. The canopy also has its own cover to keep in tucked down nicely. The bucket is made from hardwood and seats one comfortably, two cozily.

The original seat pads were intact but had long since turned to hard foam blocks so we had them replaced with brand new ones. The artisan upholsterer was able to save the original covers, however, so the "Super" is still authentic. There is a two-tone bell on the handlebars, along with a headlight, which looks like it runs from an external battery. We changed the original Dunlop/Woods valve tubes to Schraeder versions, but you still get the original Camel brand red rubber tubes which are in great condition. There are a few miscellaneous spare parts that we'll include, as well.

You read it right, New-Old-Stock. This pedicab came to us in boxes and had never been assembled, let alone used. It's taken us all this time to research it, figure out how it goes together and assemble it. The White Horse just completed its test ride around the neighborhood and is thus ready for sale. It should be noted that, though it would make a fine display piece, it was assembled by two professional bicycle mechanics and is thus roadworthy.

So, just how original is it? It's 99.9% original, minus the switch to Schraeder tubes and the replication of its fender braces which were missing from the kit. Beyond that the pedicab is authentic down to its tires.

As far as the condition of the White Horse goes, it's a 9+ on a 1-10 scale. The only downsides are the fact that the original paint is checked in a few areas on the bucket and there was very minor surface rust on a few pieces, likely from its sea voyage to the states many years ago. There is one small chrome imperfection on the top tube, again, likely from its journey. The seat covers were fine as noted, but those cushions were dead so they're fixed and good to go now. Things like the tires, grips, pedals, canopy which are all rubber or plastic-based are looking great.

The tires have very small cracks but no checking. When inflated they look new. The canopy looks brand new.

The same goes for the canopy cover. The pedals are still shiny white and show now signs of damage from age.

It's frankly rather remarkable that the pedicab is in such good condition. We've run across other unused or hardly used vintage bikes that showed degradation of their non-metal parts over time, but not so here. After the pedicab arrived stateside it was placed in a barn in California where it stayed untouched until roughly one year ago when it was discovered by the heirs of its owner. There are many thoughts amongst the family as to why the pedicab was never assembled. Rather than ramble on about them here we'll stick to the important details here. We're happy to share stories with any prospective or future owner though. The pedicab does come with an interesting backstory. We're also happy to share our thoughts on how the pedicab rides based on our limited time on it.

Capacity: One rider, up to two passengers (if they are both smaller). We are a small shop in Reno, NV that specializes in vintage bicycle restoration, refurbishing and brokerage.

The item "NOS White Horse Super rickshaw pedicab- Fresh out of box, unbelievably detailed" is in sale since Friday, April 10, 2020. This item is in the category "Sporting Goods\Cycling\Vintage Cycling\Vintage Bicycles".

The seller is "coot2" and is located in Reno, Nevada. This item can be shipped to United States.